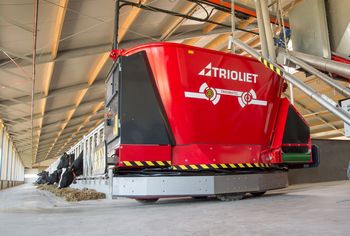 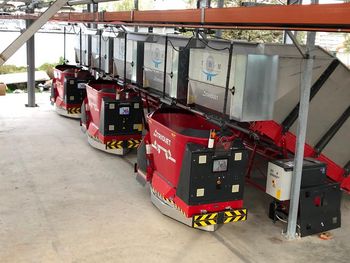 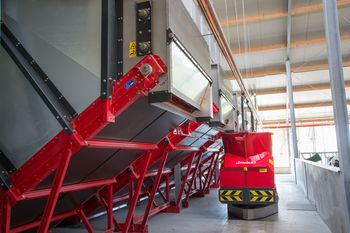 Birthdays deserve to be celebrated! This year will be the 15th anniversary of our Triomatic automatic feeding system!

This year will be the 15th anniversary of our Triomatic automatic feeding system! And this deserves a celebration. Everyone who purchases a wheel-driven or suspended Triomatic feeding robot between 15 September and 15 December 2021 will then receive a FREE power rail (no extra building construction requirements). Your benefit can amount to as much as € 15,000, so check which system is best suited to your needs and ask your dealer about the terms and conditions.

What are the advantages of a Triomatic feeding robot with a power rail?

In 2006, we installed our first Triomatic automatic feeding system at Maatschap Petter in Ommen. This dairy farm is managed by Herman van Dijk, Henry Petter and his son, Arie, and has 250 dairy cows. The benefit of the automatic feeding system is that it can be controlled with an accuracy of two decimal places, which means you can get the best returns. Henry:  "The high level of feed efficiency, between 1.55 and 1.57, is due to a number of different factors. It's not just about the feeding, but the whole range of costs. We try to be self-sufficient in terms of forage and we buy products that are less phosphate-rich. That also means we can reduce the amount of phosphate requiring disposal. When you can work to such a high level of accuracy, you get a higher return from all your business operations. We don't try for more, but for better. The automatic feeding system offers us that flexibility."

They always have fresh feed

Previously, they spent two hours a day feeding, or around 14 hours a week. "Now, feeding only takes us about 4.5 hours a week. We go through around 80 tonnes of raw feed weekly, with just 15kg of refusals. What's more, it's possible for us to feed multiple groups several times a day, so they always have fresh feed. We can even prepare a small ration for three dry cows, for example. That's tremendously important. The better you treat the dry cows, the better their performance and the fewer problems you'll have later on. The automatic feeding system is definitely competitive compared to paying for labor, as we can now feed the dry cows twice a day instead of once every other day. This is what is best for the animal health."

"It's done more for us than we could ever have imagined"

Henry: "We have achieved more than we ever imagined. In particular, the flexibility of being able to set multiple feeding times is a major plus. We can go for several days without having to worry about running out of feed. We can also make the silage ourselves, instead of using a contractor like in the past. In addition, there's no hierarchy in the group any more as there's always fresh feed available. The fixed feeding times and high frequency of feeds are also important. The cows are more relaxed. That means the heifers in the herd do better than average."

It's not just the cows who benefit, however. "I have my own hobbies too, and now I can make some time for those. That's also important, of course", says Henry with a laugh.