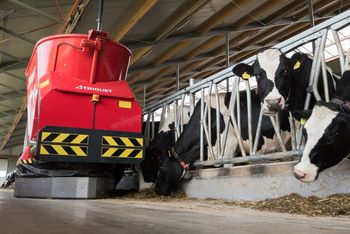 The very first Triomatic automatic feeding system was installed in 2006 at Henry Petter’s dairy farm in the Netherlands and has been feeding his 250 dairy herd every day since then. The feeding robot performs twelve feeding rounds. In the summer period, the number of feed cycles for the dairy herd decreases to eight times a day. Henry: "With the Triomatic, feeding only takes us 4 hours a week on average. We go through around 80 tonnes of forage a week, with just 80 kg or so left over. That’s about 1‰. What's more, it's possible for us to feed multiple groups several times a day, so they always have fresh feed. We can even prepare a small ration for three dry cows, for example. It's done more for us than we could ever have imagined."

The potential of automatic feeding

Automation is becoming increasingly important on modern dairy farms to allow for efficient and profitable milk production. In particular, the ability to feed several times per day has a positive impact on the feed conversion ratio. Research shows that a higher feed conversion ratio is the basis for improved overall condition and health of the cattle, resulting in a higher milk yield, better fertility and animal health.

Also read: "Is automated feeding an attractive option for me?"