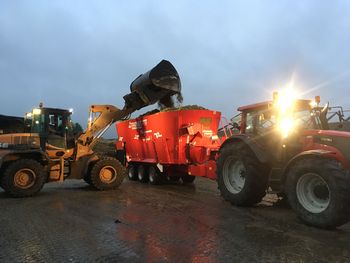 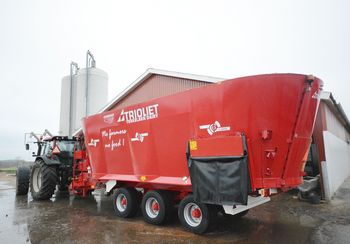 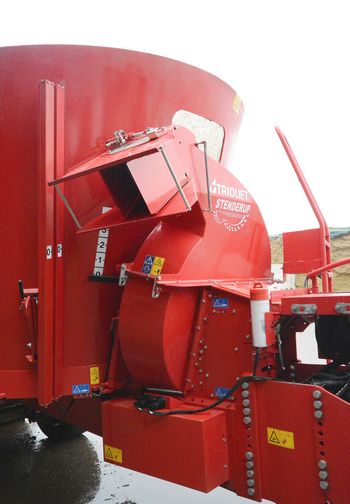 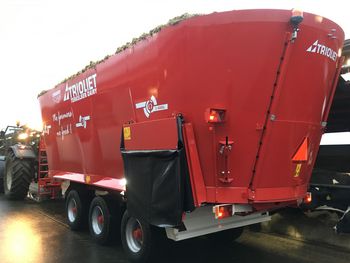 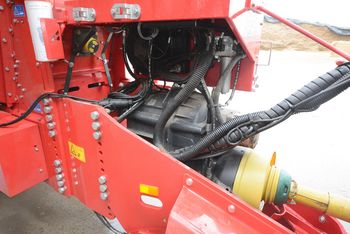 Dairy farmer Henrik Terkelsen from Southern Denmark has just completed a construction project on his farm. He built a new barn and increased his herd to 770 dairy cows. It was also a good time to upgrade his feeding technology. Given that the livestock is spread across three different locations, the new mixer feeder needs to be able to be moved by road. In addition, Terkelsen was looking for a machine with multiple functionality. He also wanted to be able to spread straw in the stalls for young livestock. With these requirements in mind, he found what he wanted at Stenderup, importer of Trioliet feeding technology in Denmark. On the importer's recommendation, Terkelsen bought a Solomix P3 4000L ZKX-TR, a heavy-duty mixer feeder with a straw blower.

This TMR mixer with strawblower fits our company really well

The towable mixer feeder has three vertical mixing augers and provides a volume of 40 m3 three times a day at the main location - two loads for the 770 dairy cows and one feeding for the dry cows. The mixer feeder then goes to two other locations in order to feed the young livestock and to spread straw in the stalls. The dairy cows receive a full corn ration while the young livestock and the dry cows receive well-structured grass seed straw.

The Solomix mixer feeder is easily visible on public roads thanks to the feeder's rear LED lighting and an extra rotating flashing light. The mixer feeder has three axles and is force steered on both the front axle and the rear axle. Thanks to the integrated chassis and the parabolic suspension (leaf spring), the mixer feeder is stable on the road and is extremely comfortable in the tractor. For Henrik Terkelsen, that was an important factor since he drives the mixer feeder for more than an hour each day on the public road between the three different locations. The mixer doesn't zig-zag over the road and barely moves while mixing.

50% more milk for the same amount of fuel

The automatic Shifttronic 3-speed reduction gearbox makes it possible to use a relatively small tractorfor this large mixer. The Shifttronic manages the auger speed and adjusts it automatically during mixing and discharging based on weight.  The number of revolutions per minute varies and depends on what the farmer programs to match best with his tractor and ration. This means that the mixer feeder can be emptied completely and allows Henrik Terkelsen to use a larger mixer feeder for the same amount of fuel compared to when he previously used a 30 m3 mixer feeder from another manufacturer. "Thanks to the new mixer feeder and to the switch from milking twice to three times per day, we produce 2,500 kg more milk per cow annually", says Terkelsen.

The mixer is also equipped wireless data transfer of the ration from the farm computer directly to the mixer using Trioliets feed management system TFM Tracker with Datalink. Rations can easily be set up and adjusted, animal groups are entered into the computer and communicated to the weighing display on the mixer feeder. During feeding, individual components to be loaded are shown on the screen and the scale counts down until the correct amount is reach. The same occurs during discharge, the preset amount for each pen is shown for each pen and then counts down during discharge. TFM Tracker greatly increases accuracy of loading and discharge and helps the operator to do a better job. At the conclusion of each load, the amount fed and where is recorded and sent back to the main computer for analysis if desired.

The Solomix, with its capacity of 40 m3, is an efficient mixer feeder. Terkelsen is able to feed all his animals and spread his stalls with straw in just three hours. He expects that the machine will last about ten years given that is made from heavy-duty materials. The augers, for example, are 22 mm thick, the walls are 10 mm thick and there is an additional 15 mm thick wear ring in the heaviest wear area of the mixing vessel l. Terkelsen: “This TMR mixer with strawblower fits our company really well. I’m very happy with it!”